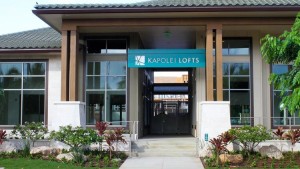 It has been nearly seven years in the making, but the developer of Kapolei Lofts marked a new milestone last week when some of the first tenants moved into the rental apartment complex.

Jon Wallenstrom, president of developer Forest City Hawaii, told PBN that the first building in the 499-unit rental housing project was completed earlier this month, paving the way for the first group of tenants to move in last week.

“If you take a look back at housing construction in Hawaii, production of new rental housing on Oahu has been scant over the last few decades,” Wallenstrom told PBN in an email. “Kapolei Lofts meets a niche that hasn’t been filled, and helps to alleviate the state’s housing shortage as well, filling the need for more quality and reasonably priced housing for West Oahu residents.”

He said the first of the four blocks that make up Kapolei Lofts, consisting of 100 apartments, will be completed by Oct. 30. The rental housing project’s 14 residential buildings, totaling 499 apartments, is slated to be complete by next summer.

“Kapolei Lofts has no special subsidies but uses some important government programs that have long been on the books,” Wallenstrom said. “Kapolei Lofts mainly needed belief, persistence, approval that had been achieved by the Campbell Estate decades ago and a private sector developer who understood market-rate rental housing.”

He said rents in the $140 million mixed-use, residential community are based on the City and County of Honolulu’s area median income, which is currently set at $86,900.

And the demand for those rental units has been significant, Wallenstrom said.

Forest City Hawaii staff handed out nearly 2,000 application packets during a two-day period in June when rental application were first made available. At that time, Wallenstrom said some prospective renters started lining up at 6:30 a.m.

“This tremendous response signifies that there is clearly strong demand for quality rental housing in Kapolei,” he explained.