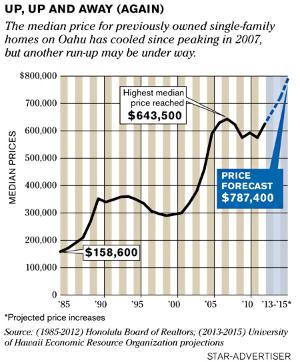 When local economist Paul Brewbaker predicted in 2003 that the median single-family home price on Oahu could soar almost 60 percent from about $380,000 to as high as $600,000 by 2005, it was a stunner — but he was on the mark. Now brace yourself for another jaw-dropper.

“That’s pretty hard for people to believe, but that’s what happens on Oahu when the market turns,” said Carl Bonham, UHERO’s executive director.

UHERO expects the median price for existing single-family homes to be $787,400 in 2015. The forecast is based on a number of factors including a recovering economy led by record tourism, historic low interest rates, very low inventory of homes for sale and a dearth of new home construction.

Such jumps may appear astounding but they bridge several years. In terms of year-to-year increases, UHERO’s projections aren’t too far beyond what has been a historical average of 5 percent annual gains.

This year through June, Oahu’s median home sale price is up 8.7 percent to $619,750 from the first half of last year. UHERO anticipates that this rate will hold for the second half of the year to put the full-year median price at $626,300. During the next two years, UHERO expects annual gains of about 7 percent, then 9.3 percent in 2015.

Mike Sklarz, a Hawaii economist who operates the real estate research firm Collateral Analytics, agrees with UHERO about the factors driving home prices but doesn’t expect quite as much of a run-up in prices.

Brewbaker considers UHERO’s projection low and expects median prices in the $700,000s could begin to appear next year.

If home prices soar, it would heighten concerns over the affordability of homes that are out of reach for many middle-income residents in what has long been one of the priciest housing markets in the country.

A recent report from the Center for Housing Policy said a Hono­lulu resident would need an annual income of $115,506 to reasonably afford a $409,000 home.

That income level is about double the typical pay of elementary school teachers and police officers, the organization said.

The Center for Housing Policy’s $409,000 home price is a median price calculated for single-family homes and condominiums.

The median is a point at which half of all sales were for a higher price and half were for a lower price.

Bonham of UHERO sees the pres­ent market as being somewhat similar to the market around 2000 when Hawaii’s economy was well into recovering from a downturn, job growth had yet to ramp up, housing inventory had fallen and developers were building hardly any new homes.

So far this year about 1,200 homes are for sale every month, with new listings replacing homes that are sold or removed from the market. This monthly volume compares with between 1,400 and 1,800 over the past two years, and close to 2,300 in 2008 after the last housing boom had begun to fade.

Based on the rate of sales this year, the inventory of homes for sale would be consumed in about four months if no new supply were added. That compares with closer to six or seven months over the past two years, and as high as almost 11 months in 2008.

“Supply is as slim as it’s ever been,” Brewbaker said.

Bonham said residential building permits are lower than they have been in more than 30 years. “We’re not building anything,” he said.

Brewbaker cites building permit data going back 70 years, and said there were only two years in that time when housing permit volume was lower than it was last year: 1942 and 1943. “It took world war to make less new housing available than there is being produced today,” he said.

Brewbaker suspects that demand could begin to pick up next year and accelerate over several years.

If demand grows significantly, it could put inventory in a bigger pinch that pushes prices dramatically higher.

Of course, unanticipated factors could arise that affect home prices, including a derailing of economic growth and a spike in mortgage interest rates.

Brewbaker doesn’t see anything on the horizon that will keep Oahu home prices from a major rise. “People can believe what they want, but they will probably look back on things in 2015 and say that they should have bought real estate a year ago,” he said. “Three years from now when it hits a higher price than the UHERO estimate, they’ll wish they had. … But, hey, I could be wrong.”