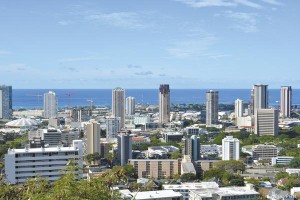 There are at least 10 new high-rise condominiums at some point in their development in the latest building boom in Honolulu, from San Diego-based OliverMcMillan’s Symphony Honolulu to The Howard Hughes Corp.’s luxury towers, Waiea and Anaha. There’s no doubt that the Kakaako skyline will be changed forever by each building’s distinct design.

But as this new skyline is being created, there are some in the architecture industry who say that the local firms are not getting their fair share of the design work, with these rare experiences going to out-of-town firms.

The lack of work also has a financial impact related to it, which could tally into the millions, although no exact numbers were available for these contracts.

Cheng, who studied under Meier at Harvard University, is known for his condo work in Vancouver, British Columbia, while Meier is a Pritzker Architecture Prize winner who currently has high-rise residential towers going up everywhere from Taiwan to Tel Aviv.

While most of the design work is done by these internationally known firms, the Hawaii firms do get a piece of the action as the architect of record, which by state law, has to be a firm with a license to practice architecture in the state.

Rob Iopa, president of WCIT Architecture, told PBN that he favors local firms getting the lead role in designing world-class towers in Hawaii.

Iopa noted that his firm likes to have more of a proactive role in designing than others.

“Sometimes, when you let big names come in, they would do the design,” he said. “We were an integral part of the design process of Waiea.”

The tower is designed in a way to showcase a story of two Hawaiian fishing gods, a father and son from Kauai, who stopped on every island to teach everyone to fish.

“They stopped in Kakaako and found this as their home,” Iopa said. “When the father passed, he gave his son five fishing tools that has been used by Hawaiians to fish. So the tower was designed with this story in mind.”

Having a big role in designing such a highly visible high-rise is a coveted role for many in the local architecture scene, and it’s something WCIT has recently experienced.

Iopa says that often, the developers themselves are not from Hawaii and turn to Mainland-based architecture firms they’ve used in the past and with whom they are comfortable.

“Sometimes for local developers, they may have a particular connectivity with a group that brings a certain look, and maybe they have made relationships with national firms they like to bring here,” he said. “I think there are lots of local firms that are trying to break that mold. I’m certain that there’s the talent here to do residential towers.”

John Ida, a founding partner of Urban Works Inc., told PBN that the local firms should get all or most of the design work. His firm has been located in Kakaako for about three decades, long before the current condo building boom.

“We do have talent here to do those kinds of projects,” he said. “It kind of gives us a bad image [that we aren’t], as if we can’t design great buildings here, but that’s not true. Hopefully it doesn’t put down the design community.”

Matt Gilbertson, president of Honolulu’s MGA Architecture, noted that every time a major project is awarded by a landowner or developer to a non-Hawaii firm it sends a ripple through the local architecture industry.

“Were we even given a chance to propose?” he asked. “A landowner has the right to do what they choose. There are no unions for architects and owners have a right to develop their site for whomever they want.”

Gilbertson pointed out that architecture is a competitive business, and the fact that Hawaii firms are getting left behind for the design work of these highly visible structures shows how the industry has to compete even harder for this type of work.

“Architects in Honolulu have been put in the second seat, unfortunately,” he said. “I’ve lived in multiple cities, and it’s not something Hawaii architects should be hyper-sensitive about. There are people who have chosen to play at the world stage.”

Craig Takahata, vice president and managing director of Honolulu-based WATG, which is trying to get more work in the state after years of putting more of its focus towards other markets, told PBN that he thinks the opportunities will eventually come.

“Interestingly, every developer asks to see your qualifications and work, so if some of the local firms don’t have that experience, they would need to get that experience elsewhere,” he said.

The Howard Hughes Corp. utilizes, on all of its high-rise projects, a pairing of a local firm with a Mainland or international firm for a number of reasons.

“We really made an effort to look for some of the most talented designers anywhere in the world, who are doing projects all over the world,” Nick Vanderboom, senior vice president of development for The Howard Hughes Corp.’s Ward Village, told PBN. “They bring a unique perspective and they have the best and brightest people working with them. Teaming local with international, we get the best results. We’re able to have a mixing of ideas and concepts.”

The Texas-based developer’s core buyer, which it says mostly comes from the Islands, really appreciates the uniqueness of an internationally known architect designing their first building in Hawaii, he said. It may even mean more than it might to project’s Mainland or international buyers

“We do that because it appeals to our buyers and creates an interesting skyline environment,” Vanderboom said. “It’s not always the same for every project. For our Ward Village Gateway project, we are very excited about bringing in Richard Meier to Honolulu. He has designed museums all over the world, among other things. For that project, we went through a very unique process. We did a request for qualifications to a lot of different firms and then shortened that list to four, eventually choosing Meier.”

He also noted that it worked and consulted with Paul Goldberger, an architecture critic who also is a contributing editor for Vanity Fair magazine.

“He actually very rarely does work for private clients,” Vanderboom said. “He worked with us in divvying up proposals. That was an important part of the process selecting international firms.”

When selecting local firms, The Howard Hughes Corp. used a similar process as for the selection of the international firms.

Honolulu firms that are part of the architecture teams include WCIT Architecture for the condominium Waiea, Benjamin Woo Architects on Anaha, CDS International on 988 Halekauwila, and Architects Hawaii on the Whole Foods and Gateway projects.

“We are familiar with these firms,” Vanderboom said. “It was a very intensive and long process.”

He contends that it didn’t choose all local architects for its condo projects because the people it is working with are very specialized international firms with unique styles.

“There really is no one else in the world who does it exactly the way they do it, and if you’re looking for something truly unique, we find that by going to the international firms, it brings new ideas to the market,” he said. “It doesn’t mean we don’t have talented firms here. We really rely on them tremendously. It’s just looking to bring new and unique ideas and innovations. Ultimately, it will create an interesting skyline that appeals to retailers and potential residents who live in Ward Village.”

“Their audience is a worldwide audience and to attract worldwide attention,” he said. “This is an international sale, not for local folks, the price tag in general.”

Gilbertson says it should be no surprise that The Howard Hughes Corp. has been talking to the top architecture firms in the nation and world, given that market-driven ambition.

“It just happens,” he said. “All small architectural environments like ours have to realize that, when the world market is watching, we have to take a back seat. It happened to me in Minneapolis. It is just part of the lay of the land.”

In general, the choosing of a design firm comes down to the mind-set of the development and developer, where design is playing a role in the project, according to Gilbertson, who pointed out that if a design is a signature piece like Ward Village’s Anaha and Waiea, design is the differentiator.

“When it’s at an apartment building or affordable housing level in Honolulu and design isn’t a distinguishing characteristic, that’s when a local architect makes sense for the developer,” he said. “When they need to sell the sizzle on a world stage, they need to pull some considerable names. It doesn’t surprise me given the client, the luxury level [The Howard Hughes Co.] is trying to pursue.”

To Gilbertson, it’s not that Hawaii lacks talent in this area, but if an architect anywhere is great, and their work isn’t seen, getting noticed is tough to come by.

One way local architects can get involved is through the permitting or public outreach stages.

The only type of work his firm doesn’t do is high-rise condo work, mainly because it is a young firm, thus it does not yet have the reputation to do such towers.

Not all the local architecture firms want to get involved in designing Honolulu’s newest skyline.

Honolulu’s Group 70 International, one of the largest architecture firms in the state, takes itself out of equation by avoiding high-rise condo work for a reason that may not occur to people outside of the industry — the issue of project insurance.

Without it, the firm is subject to possible lawsuits down the road.

“Condos have had a consistent track record of taking the contractor and architect to court,” Charles Kaneshiro, president of Group 70, told PBN. “If there is project insurance, we would be happy to get involved. It is significant enough [of an amount] that most developers won’t [get project insurance].”

He noted that developers or landowners have approached them to get involved in projects, but usually the question of project insurance for high-rises comes up.

“We do low and mid-rise projects without project insurance,” Kaneshiro said. “These are much easier to handle, dealing with fewer owners and it’s a smaller project in general.”

Urban Works also does not go after high-rise condo work.

“Our insurance doesn’t like [Association of Apartment Owners], so we haven’t gone for any high-rises that are condominiums,” Ida said.

Kaneshiro says that there is certainly enough talent in Hawaii to do high-rise condo work, but proving it is hard to do when the opportunity never arises.

“She has done high-rises and signature buildings,” Kaneshiro said. “Can people local do it? How many have had that opportunity to live in the places she’s lived and then come back to Hawaii? That’s a rarity.”

He said that one good thing about having internationally acclaimed architects in town designing buildings is that it raises the profile of architecture in the state, providing other design points of view on what a Hawaii building could be, or should be, something people can then debate.

“It gives us some variety here that we didn’t necessarily have in the past,” Kaneshiro said. “It gives developers a marketing strategy. There’s a lot of work out there for local firms to pursue as well.”

The American Institute of Architects, Honolulu Chapter, told PBN it does not have a position on the issue of high-rise condo work mostly going to firms not from Hawaii.

While many current high-profile high-rise commissions are being designed by Mainland or international firms, the Honolulu skyline does boast notable high-rises by local architects, including hotels, office buildings and condos, such as:

While many current high-profile high-rise commissions are being designed by Mainland or international firms, the Honolulu skyline does boast notable high-rises by local architects, including hotels, office buildings and condos, such as: