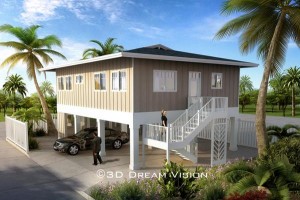 A California firm has purchased a little more than two acres in the Honolulu neighborhood of Kalihi, with plans to redevelop the 22 structures on the land into a 26-unit complex.

The development is scheduled to break ground on Monday, the real estate agent handling sales for the project told PBN.

Gregory Owen, founder and CEO of Vacaville, California-based Blue Mountain Homes LLC, is the developer for Kauhale Gardens, which includes 16 new single-family homes and five duplexes, with prices ranging from $425,000 to $725,000.

The development team includes Primary Properties Inc., which is handling sales; Imanaka Asato as the project’s attorney; Seal Pros Hawaii as the general contractor; Primary Residential Mortgage as the lender; TN Designs as the architect; and Lyons & Associates as the civil engineer.

The single-family homes will include three bedrooms and two bathrooms as well as two parking spaces.

There will be one newly built duplex and four renovated duplexes.

Cameron Higgins, a Realtor-associate with Honolulu-based Primary Properties, told PBN that the project’s infrastructure should take about a month to build. The plan is to begin selling homes in June or July.

Blue Mountain Homes is a family-owned company with more than three decades of acquiring, restoring and selling single-family homes.

California-based Polymathic Properties Inc. purchased the property in October 2014 from another California-based firm, UHC Kauhale Ohana LP, for $3.3 million, according to public records.

UHC Kauhale Ohana acquired the property for $4.5 million in 2008.