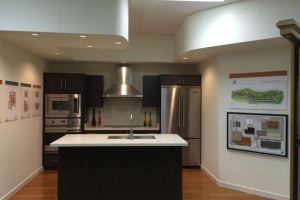 Kapiwai, a planned 24-home sustainable luxury subdivision near Downtown Honolulu, has sold out all of the units in its first phase and is now accepting contracts on the last seven units of phase two, the brokerage firm marketing the project told PBN.

Construction of the private road and improvements have been ongoing since September.

Interest in the 15-acre project in Honolulu’s Pauoa Valley, which has an average price of $1.6 million, has come from local professionals, executives, owners of businesses, doctors and other professionals, including U.S. Magistrate Judge Kevin Chang and his wife, Lannice, who were among the first owners in the Kakaako condominium Keola Lai.

The mix of owners include people who live in condos and want something that’s lateral living, being close to nature, Takaki said.

Schlack Ito energy and environmental attorney Douglas Codiga, who became the first Hawaii resident to drive the new BMW i3 EV, recently settled on Kapiwai after years of searching for the right place.

While Clifford is still part of the team, Schatz, who, after helping bring Kapiwai to market and the start of construction, recently transitioned to a development manager’s position with Ohio-based developer Forest City.

Rik Papa, a longtime project executive at Honolulu-based Stanford Carr Development, took over for Schatz, and will help oversee the project through the completion of construction.