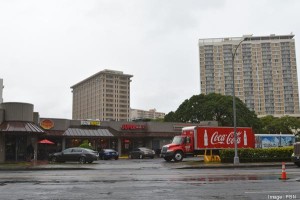 The location across from the Hawaii Convention Center in Honolulu where a new mixed-use high-rise development is being planned.

A new mixed-use tower is being planned for the highly visible corner of Kapiolani Boulevard and Atkinson Drive in Honolulu across from the Hawaii Convention Center and a block away from Ala Moana Center, PBN has learned.

Architects Hawaii Ltd., which will present an “Atkinson Project” to the Ala Moana-Kakaako Neighborhood Board on Tuesday, confirmed to PBN this week that it is working on a project on the corner of Kapiolani Boulevard and Atkinson Drive, site of the current Atkinson Center retail strip center.

“It is still very much in the formative stages of conceptual design, but at this point is envisioned to be a mixed-use high-rise development,” Bettina Mehnert, president and CEO of Architects Hawaii, told PBN in an email.

She declined to reveal any other details regarding the project, per the unnamed developer’s request.

The Atkinson Center, which includes such retailers as 7-Eleven, Subway and Supercuts, is currently located on the property where the project is being planned at 1695 Kapiolani Blvd. The strip center is being leased by Colliers International Hawaii.

The company registered as a new business in Hawaii in April, with Hiroko Keister, a tax advisor for Honolulu-based Bella Tax & Accounting Inc., listed as the agent.

PBN reached out to Keister and Colliers International for comment.

The development of the mixed-use high-rise is the second tower being planned for the area.