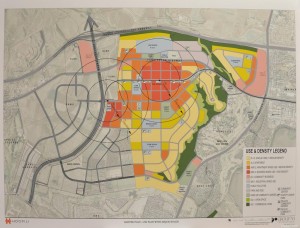 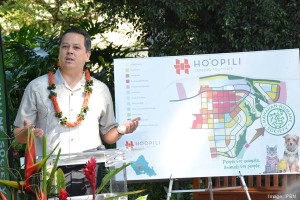 D.R. Horton — Schuler Homes, the developer of the 11,750-home Hoopili project, has donated five acres from the West Oahu master-planned community to the Hawaiian Humane Society for a second campus, the organizations announced Tuesday.

The facility will be located at the corners of Old Fort Weaver and Fort Weaver Road, according to D.R. Horton Vice President Cameron Nekota.

Hawaiian Humane Society President and CEO Pamela Burns said that the nonprofit has been searching for a West Oahu location since 1999.

“It’s through the generosity of D.R. Horton that this is becoming reality for humans and animals that will be served in Hoopili and the entire community,” she said.

Talks with D.R. Horton (NYSE: DHI) began about five years ago, she said.

The new campus will have a staff of 25, and will serve about 200,000 Leeward residents and 16,000 animals. Services will include admissions, sterilization, lost and found, adoptions and a dog park.

The original 2.5 acre Moiliili campus, which employs 85 people and currently oversees 600 volunteers, will remain as the designated administrative office. An $8 million two-phase expansion and renovation has no set date for construction yet, Burns said Tuesday.

“This is one more step in creating a vision of a true second city in Kapolei,” Nekota said, noting that 74 percent of Leeward residents are pet owners.

More than 26,000 animals arrived at the Moiliili location last year. Sixteen thousand of those are expected to be served at the second campus.

The Hawaiian Humane Society is nearing the end of its $18 million capital campaign, about half of which has been dedicated to Moiliili, and an undisclosed amount will be spent on the West Oahu campus.

Burns said that there is no estimated opening date, and more details will be worked out in the next six to 12 months.

D.R. Horton — Schuler Homes LLC, told PBN that it plans to tentatively start construction on Hoopili sometime in 2016, but still needs approval from the City and County of Honolulu to change the zoning for the land from agricultural to urban.

D.R. Horton will ask to have the land rezoned from agricultural to urban. The state Land Use Commission already has approved the zoning change.

Ikaika Anderson, chair of the Council’s Zoning and Planning Committee, is expected to ask Council Chairman Ernie Martin to include the Hoopili project on the Feb. 18 agenda, said Gail Myers, senior adviser to Anderson.

“We anticipate that he will,” she said in an email to PBN. “Providing that the bill passes first reading, it will be referred to the Committee on Zoning and Planning. The Council agenda posts on Feb. 12, at which time we will be certain that Bill 3 appears on that agenda.”

This week, PBN first reported that Honolulu firms The MacNaughton Group, Kobayashi Group and BlackSand Capital are under contract to buy 33 acres of land near Hoopili, which could become a retail center. The companies are well-known developers of retail and residential projects in Hawaii.