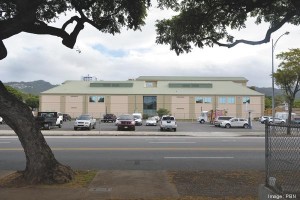 “That whole area is in transition,” said Scott Mitchell, executive vice president of Colliers International Hawaii. “Lots of money is being spent in that area. It’s a pretty astute buy.”

PBN broke the news this week that the Honolulu-based bank, a subsidiary of Hawaiian Electric Industries Inc. and sister company to Hawaiian Electric Co., is buying the 62,595-square-foot parcel at 230 N. Beretania St., just outside of Chinatown, for an undisclosed price.

The move will bring together 600 of its employees from around the island, including its top executives, in a 100,000-square-foot building.

“They don’t have to continually rent,” he said. “Since it’s an owner-user [arrangement], it might be a good move.”

Hamasu also noted that it might help clean up the area.

“By building on a previously vacant site, it will likely relocate the people using the site right now,” he said.

Richard Wacker, president and CEO of American Savings Bank, told PBN that the new location gives it the culture to collaborate and move quickly.

“We spend a lot of time on company culture and we try to be the best place to work,” he said. “Bringing everybody together will be a big step.”

The new corporate campus — likely to be a single structure, with parking — may include a branch on the bottom floor, said Beth Whitehead, the bank’s executive vice president and chief administrative officer.

“It really has been a goal of ours to find a campus for several years,” she said. “We have teammates in six different locations. That’s difficult to huddle and work together. We have been looking for and debating on a location for years.”

Approximately 600 current employees will be moved to the new location from offices in Mililani, the 677 Ala Moana Building near Downtown Honolulu, the Financial Plaza of the Pacific in Downtown Honolulu, Kalihi, Chinatown and the American Savings Bank Tower at Bishop Square.

There are no plans to close any branches, including those in Chinatown and Bishop Square, near the future headquarters, Wacker said.

Plans for the building have not been finalized, although 100,000 square feet is a rough estimate of how much space it could encompass, Whitehead said, adding that construction and opening dates have not been confirmed.

“We have to finish the elements of design and budget for it,” she said.

The property, which is made up of two parcels, had an asking price of $14 million, according to JLL, formerly Jones Lang LaSalle, which marketed the property at the corner of North Beretania and Aala streets.

Seattle-based HighMark Investments, the owner of the property, whose owners used to own a construction company in Hawaii, had plans in 2006 to build a 15-story medical office building and outpatient surgery center there.

About two years later, another plan to build a medical office building by Montecito Medical Investment Co., in partnership with PM Realty Group, also fell through, mainly because of the economic downturn