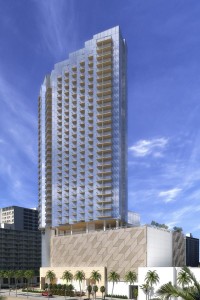 The Honolulu developers of a 32-story, 246-unit condo-hotel project in Waikiki that would replace King’s Village, Prince Edward apartments and Hale Waikiki plan to start construction in 2016, according to public documents. Construction is expected to conclude in 2018.

The MacNaughton Group, Kobayashi Group and BlackSand Capital are the developers of the 133 Kaiulani condo-hotel development, which will include 168 studios, 73 one-bedroom units, 1 two-bedroom unit and 2 three-bedroom units in a 350-foot tower, according to the project’s final environmental assessment.

About 85 percent of its units are anticipated to operated in a hotel rental program.
The project’s ground floor will include retail space, a lobby and support spaces.

The reception area, lobby lounge, bar lounge, full-service restaurant and multiple event spaces and executive offices will be located on an amenity deck above the parking floors.