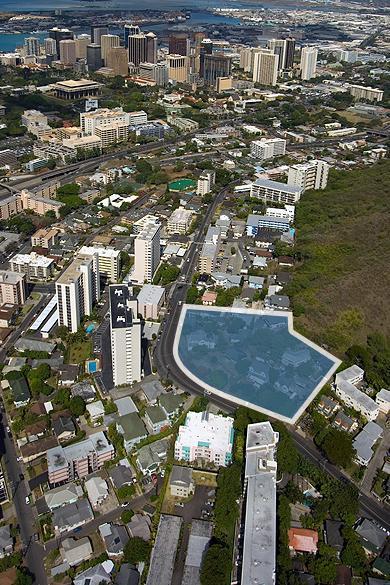 The area in blue shows the proposed location for Skyline Honolulu, on Prospect Street in Honolulu on the slopes of the Punchbowl crater.

Skyline Honolulu, a 140-unit residential project in Makiki that was first approved by city permitting officials about seven years ago but was postponed due to the Great Recession, is being revived because of an improved economy, with new plans to be submitted to city this month.

Tom Schnell, principal with Honolulu-based PBR Hawaii & Associates Inc. and part of the development project’s team, said at a recent neighborhood board meeting that the long-planned project, which covers 1.6-acres with a height limit of 40 feet, includes 12 individual residential properties, with the main building located on Prospect Street.

He noted that Skyline Honolulu will soon be starting its traffic study and present its new plan to the City and County of Honolulu’s Department of Planning and Permitting this month.

Construction is estimated to start in the fall with a completion anticipated 14 months after that, Schnell said at the January Makiki-Tantalus Neighborhood Board meeting.

In 2008, the city’s Department of Planning and Permitting approved the project, which then included 95 units.

Robert Andrade, a homeowner who lives across the street from the development, told PBN Tuesday that he is one of 20 or so people opposing the project, with one of the main concerns being traffic.

“[It’s also] the enormity of the project,” he said, noting that he has lived in the home his parents built since the 1960s. “We are [also] concerned with them digging into the side of [the] Punchbowl crater. The ground is very unstable.”

The project is listed on the agenda for the February Makiki-Tantalus Neighborhood Board meeting set for Thursday.

PBN reported in May that the developer of the project — an affiliate of Honolulu-based Form Partners LLC — was reviving the development.

Form Partners is the same developer for several Hawaii projects including The Vanguard Lofts in Honolulu and Robertson Properties’ $767 million planned mixed-use project on the former Kamehameha Drive-in Theater in Aiea, which was approved last year by Honolulu Mayor Kirk Caldwell.

Bill Deuchar, a partner of U.S. Pacific Development LLC, an affiliated company of Form Partners, for which he is also an advisor, previously told PBN that a much improved economy today is the main reason why the project has been revisited.

PBN reached out to Deuchar for comment on Tuesday.