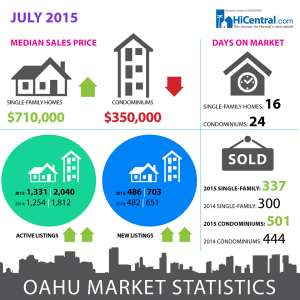 The median sales price of a single-family home on Oahu rose 4 percent in July to a year-to-date high of $710,000 amid a 12 percent rise in sales, compared to the same time last year, according to a monthly report released Friday by the Honolulu Board of Realtors.

“July continued the healthy trend in housing sales that we saw in the previous month,” Honolulu Board of Realtors President Jack Legal said in a statement.

Still, the decline in condo prices is a positive development, said Legal, who noted that there was a 16 percent jump in the number of condominium units sold that were priced below $350,000.

“About a third of these condos were found in four neighborhoods: Makaha and Makakilo in West Oahu, and Makiki and Ala Moana,” Legal said. “It’s encouraging to see more sales of affordable condos, particularly those close in the urban core.”

Year-to-date, the number of single-family homes sold between January and July totaled1,926, a 4.8 percent increase from the 1,837 that were sold in the same seven-month period last year. Meanwhile, the year-to-date median sales price of those homes also rose slightly by 2.3 percent to $690,000, from $674,700 during the same seven-month period last year.