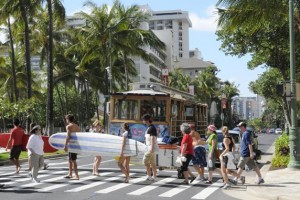 Honolulu is planning a major deployment of free Wi-Fi in Waikiki this year as part of a larger effort to expand this type of service throughout Oahu, the head of the City and County of Honolulu’s information technology department told PBN.

For several years, the department has already been partnering with carriers to provide free Wi-Fi in dozens of locations on Oahu.

Mark Wong, director and chief information officer of the city’s Department of Information Technology, told PBN that engineering work is currently being done for this major project in Waikiki, with plans to begin delivering service sometime this year.

“We are expanding fee Wi-Fi in the city,” he said. “We have a franchise agreement with Oceanic [Time Warner Cable] to deploy free Wi-Fi in areas across Oahu in heavily populated areas or areas that the public uses a lot.”

Wong noted that these targeted areas currently do not have free Wi-Fi access.

The entire project, which includes the state’s tourism mecca, is expected to cost just under $1,000 per month.

“We’re doing it this year and we’re doing it area by area,” he said. “The goal is to make Honolulu a showcase of what can be done.”

Last week, PBN first reported that Honolulu also is planning to install a $2 million high-speed Internet project along its planned 20-mile elevated rail transit system line that will run from West Oahu to Ala Moana Center.

The project, which involves installing 1,000 pairs of fiber to provide broadband access to the areas near the 21 rail stations, is expected to begin installation this year.