Built in Honolulu, Hawaii in 1937, Shangri La is framed by the beautiful Pacific Ocean and 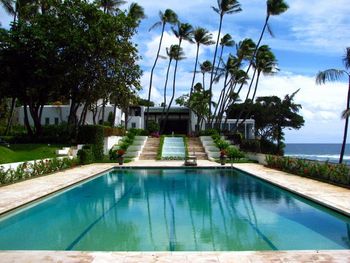 the distinctive profile of Diamond Head, and also houses Doris Duke’s intriguing collection of Islamic art. Today, Shangri La serves as a center for Islamic arts and cultures. It is owned and supported by the Doris Duke Foundation for Islamic Art (DDFIA), which Doris Duke created in her will to promote the study, understanding, and preservation of Islamic art and culture. Education programs such as residencies, lectures, performances, panel discussions, among other special events with a focus on Muslim arts and culture are offered. The estate can also be visited by public tour and by virtual tour.

The roots of Shangri La lie in Doris Duke decision to build a seasonal home in Honolulu after her honeymoon in 1935. On her honeymoon, she visited Muslim countries for the first time and her journey also  included an extended stay in Hawaii. Finding herself captivated by Islamic cultures and enamored with Hawaii, Doris Duke designed her new home in collaboration with architect Marion Sims Wyeth to evoke the beauty and character of each. Shangri La borrows architectural elements and artistic sensibilities from regions of the Islamic world, and blends them with a distinctly Hawaiian landscape that features sweeping ocean views, exotic gardens and a 75-foot saltwater pool.

From its inception, Doris Duke’s estate in Honolulu, Shangri La, was envisioned by its
founder as a home of Islamic art and architecture. As early as 1936, Shangri La was shaped by a symbiotic relationship between the built environment and the collection. Architectural design was influenced by the objects collected, and the objects to be collected were assessed for their potential place within the built environment. From her first foray into collecting while traveling in the Islamic world until her death in 1993, Duke’s pattern of collecting for design remained remarkably consistent, yet it also matured. 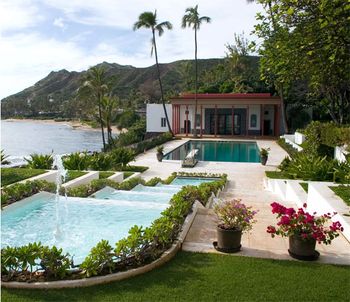 For nearly 60 years, Doris Duke commissioned and collected artifacts for Shangri La, ultimately forming a collection of about 3,500 objects, the majority of which were made in the Islamic world. Massive painted ceilings, elaborately carved doorways, intricate mosaic tile panels, colorful textiles, and numerous other art forms enliven the interiors and create an environment rich in texture and pattern. Accompanied by the sound of crashing waves, fountains, and bird calls, Shangri La is truly a multi-sensory experience.


Shangri La is the Honolulu home of Doris Duke. Built in 1937, Shangri La houses an impressive collection of Islamic art and is considered one of Hawaii’s most architecturally significant homes.

Shangri La is the Honolulu home of American philanthropist Doris Duke. Built in 1937, Shangri La houses an impressive collection of Islamic art and is considered one of Hawaii’s most architecturally significant homes. Shangri La is open to the public for tours and special programs, and can also be visited by virtual tour.

To own your private Shangri La – Private estates listed here