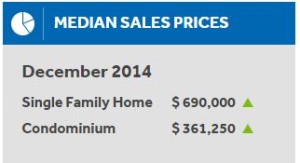 The median price of a condominium on Oahu reached a record $361,250 in December, a 9.5 percent increase from the same month a year ago, according to figures released Tuesday by the Honolulu Board of Realtors.

Sales of single-family homes remained flat in December at 284 sales, compared to 283 home sales in December 2013.

“This month’s sales figures basically stuck to historical norms except for one aspect,” Jack Legal, president of the Honolulu Board of Realtors, said in a statement, referring to the record median price for condos. “One positive is that the inventory of condos was up in December as compared to the previous year.”