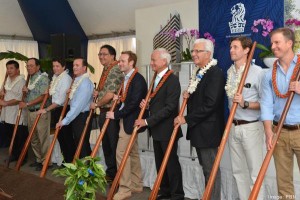 While the first 324-unit, 37-story “West” tower, which is more than halfway built, nears completion in early 2016, community and business leaders — including Honolulu Mayor Kirk Caldwell, who arrived straight from his 2015 State of the City address — gathered for a groundbreaking ceremony for the “East” tower.

It also was the first groundbreaking for newly-minted Irongate Managing Principal Lance Wilhelm, who for many years, attended these types of ceremonies as a general contractor with Kiewit.

The 246-unit, 37-story second tower is expected to be completed in 2017. Both projects are expected to account for more than 600 construction jobs.

The developer declined to reveal the estimated development cost of the projects, as well as exact sales of the two towers. However, Wilhelm previously told PBN that the first tower was sold out.

Located at 2121 Kuhio Ave., next to the Luxury Row of retailers that include Tiffany & Co., Chanel and Gucci, the project will include Hawaii’s first Dean & DeLuca, Sushi Sho, BLT Market, BLT Bar & Grill and a yet-to-be-announced locally-owned produce and grocery market.

Irongate founder Jason Grosfeld, who also is the managing member of Pacrep LLC, which is developing the Waikiki Ritz-Carlton projects, told PBN that it has no other projects on the drawing board yet in Hawaii.