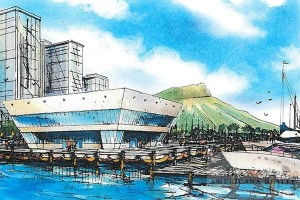 A Mainland investment group is putting up almost the entire development cost of $34 million for the long-planned Waikiki Landing mixed-use project at Hawaii’s Ala Wai Small Boat Harbor, the attorney for the developer confirmed to PBN.

“We have somebody who is going to finance almost the entire amount,” Keith Kiuchi, the attorney for developer Japan-based Honey Bee USA, told PBN on Wednesday. “They’re asking for an equity interest [of about 50 percent].”

Kiuchi declined to disclose the name of the investment group, only to say that while it has not done any projects in Hawaii, it just recently funded an $81 million project on the Mainland.

“These guys are willing to put in, what they’re calling is a loan,” Kiuchi said.

The project, which includes wedding chapels, restaurants, retail and office space and a boat-repair facility and fuel dock, also is close to getting a sewer permit.

Next month, Kiuchi plans to unveil details regarding the new investor, to the state Department of Land and Natural Resources, which owns the land, at the state agency’s regularly scheduled meeting.

No new timeline for construction has been set yet for the project, which will be located next to Honolulu’s Hawaii Prince Hotel.