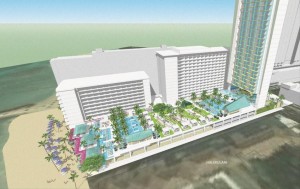 Outrigger Enterprises Group plans to begin its phased redevelopment of its Outrigger Reef on the Beach, which will add a 200-room hotel tower to the Waikiki hotel by the end of 2017 or early 2018 — about a year later than it expected — a company executive confirmed to PBN Friday.

The Hawaii-based hotel company, which has strong roots in the state through the Kelley family, has been watching the rejuvenation of Waikiki with great interest.

“We recently concluded our renovation of our Embassy Suites, our Ala Moana Hotel, and did a fair amount of work at the Best Western at the Honolulu airport,” Barry Wallace, executive vice president of hospitality services for Outrigger, told PBN. “We also have renovations planned for our Holiday Inn and Outrigger Reef hotels.”

The Outrigger Reef project, which was announced in April 2014 as a $100 million redevelopment, includes a new hotel tower that will be set back from the beach along Kalia Road.

“We’re already a year or two behind on that and are breaking [the construction] up in pieces, two phases,” Wallace said. “Each phase should take between 12 and 24 months.”

The project also includes significantly enhancing the amenities of the resort.

“Plans are presently being refined and we’re talking to contractors,” Wallace said. “The rooms will be oceanfront even though they will be across from the ocean. This would be the first new hotel rooms delivered in a long time. It’s about 200 net new rooms.”

Outrigger’s last major redevelopment project in Waikiki was the $535 million Waikiki Beach Walk project that opened in late 2006 and revamped the block along Lewers Street with several dozen retail shops and restaurants, and a 21-story Embassy Suites Hotel.