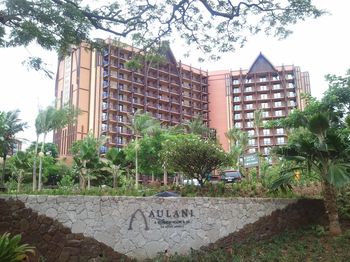 The opening will follow more than four years of planning and about 21⁄2 years of building the 840-unit luxury hotel and time-share complex created to present visitors — especially families — with culturally rich stories of Hawaii influenced by the magical world of Disney.

Aulani will be the largest attraction at Ko Olina and Disney's first foray into Hawaii tourism. It also promises to introduce something unique on a couple of broader levels.

For Disney, Aulani represents its first vacation resort absent a theme park and could be a model the company replicates elsewhere.

For Hawaii, Aulani will be a grand, though commercial, showcase for Hawaiian culture that Disney says goes far beyond the cultural programs of other Hawaii resorts.

"Aulani is really a reflection, a portal, to a real place," Djuan Rivers, a Disney vice president overseeing Aulani, said in a video promoting the resort. "It is not something that is make-believe."
Aulani's layout was designed to represent an ahupuaa, the traditional Hawaiian land division from the mountainsto the sea containing abundant resources that sustained communities settled by the first human inhabitants of the island chain.

Aulani's two towers symbolize mountain ridges on each side of a valley through which water from springs and rivers flow into fishponds and pools, and then seemingly into the ocean through one of Ko Olina's man-made lagoons.

Within Aulani's pretend Waikolohe Valley are a saltwater snorkel lagoon filled with around 1,500 fish, and a lazy river raft ride flowing along simulated lava tubes and steam vents.
Other resort elements include a bar where Hawaiian language is the topic, one of the world's largest collections of contemporary Hawaiian art and terraces of taro that guests can harvest and pound into poi. 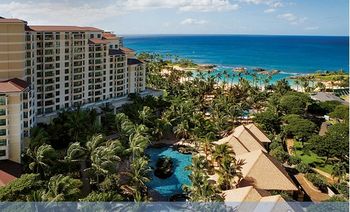 Some details of Aulani are being kept secret to be discovered by guests, so it's not yet possible to judge Disney on what it ultimately will deliver.

The company that created Mickey Mouse sometimes has been criticized for homogenizing the world rather than showcasing its diversity. But Disney officials have said they learned valuable cultural lessons opening resorts in France, Hong Kong and other places that have helped make Aulani a truer cultural experience.

In Hawaii, Disney developed its own cultural training curriculum for Aulani's roughly 1,200 employees — which it refers to as "cast members" — based on a course executives took at Kapiolani Community College taught by Palakiko Yagodich.

The training program, dubbed "Spirit of Aulani," was devised over the past 18 months and delivered by Yagodich and Stephen Eng.

Some Disney values also are in force, including a prohibition on visible tattoos for all employees and long hair for men except for some artistic entertainers.

Erin Mattson, a Kamehameha Schools graduate from Kahaluu hired to manage retail inventory at Aulani, said Disney has put an incredible effort into showcasing and perpetuating Hawaiian culture.
"I know Disney is a show," she said. "It's a show, but we're just being ourselves. We have this seed in us and we were never allowed to bloom as a people, as a culture, as a nation. Disney has allowed us to bloom. It's been an awesome and wonderful journey."

Anson Shimabukuro, who was born and raised in Mililani and is an Aulani valet captain, compared his experience working at another luxury hotel and said some of his former colleagues embraced and effused Hawaiian values while some didn't. At Aulani, he said everyone has committed to share such values. "Here it holds us together," he said.

The Florida-based conglomerate generated $38 billion in revenue last year from assets including theme parks, cruise ships, movie productions, retail stores and TV stations including ABC, The Disney Channel and ESPN. Aulani will be the latest addition to the giant stream of income.

Aulani is divided into 359 hotel units and 481 time-share units, from studios to three-bedroom suites. The company also will derive revenue from other aspects of Aulani such as an 18,000-square-foot spa, two restaurants, conference rooms and a beachfront lawn where Disney will produce "fairy-tale" weddings.

Though Aulani's focus is Hawaiian culture, Disney will have some of its costumed cartoon characters interacting with guests. Mickey Mouse, Minnie Mouse, Goofy, Stitch, Chip and Dale will be "on vacation" at the resort.

Disney commissioned an economic impact study of Aulani from CBRE Consulting with assistance from the University of Hawaii Economic Research Organization that concluded that the resort would generate $634 million in local economic activity.

The contribution includes some nonrecurring spending from construction, but also a recurring annual benefit of $271 million from spending tied to operating Aulani such as wages, goods and taxes.

"It's going to have a huge impact on Ko Olina, on Oahu and on the state," said Todd Apo, Aulani's public affairs manager who resigned from the Honolulu City Council to join Disney last year. "You're bringing in a worldwide brand name with a one-of-a-kind family resort."

Disney would not disclose initial occupancy or time-share sales. When Aulani opens, only about a third of its 840 units — 217 hotel rooms and 73 time-share units — will be in use. Disney is opening the balance in two additional phases later this year and in 2013.

Based on a rough estimate for Aulani time-share prices, Disney could take in something in the neighborhood of $1.2 billion from sales.

Just how important Aulani's time-share product is was revealed last week when the company acknowledged it had underestimated the annual dues it plans to charge time-share owners to cover operating expenses. The dues ranged from $543 to $5,551.

The reported that Disney fired three executives because of the foul-up, including time-share division President Jim Lewis and two other high-ranking executives who previously worked under Lewis.

Disney sold Aulani time-share product for a year before the mistake was discovered and sales were frozen in mid-July. The company said it will honor the originally stated dues for existing owners, and will apply higher dues for new buyers after regulatory documents are updated with the state. Disney did not say how much the new dues will be.

This aspect of launching Aulani has not gone according to script, but Disney said the problem isn't going to upset the opening.

Last week Disney was conducting rehearsals at Aulani, filling up rooms with Disney employees from outside Hawaii. Real guests will experience Aulani next Monday.

Rivers, the Disney vice president overseeing the resort, said the production is ready. "Our new cast members are performing exceptionally well during our test phase and are looking forward to greeting our guests with the spirit of aloha and the guest service for which Disney is known."