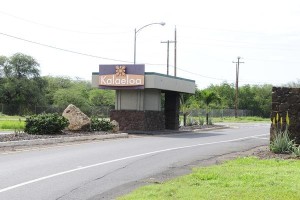 The entrance to Kalaeloa, where part of Hawaii’s largest apartment rental portfolio sale in 2014 is located.

Located at 1320 Aala St., the property consists of 24 buildings on 12 acres and is about 97 percent leased.

David Asakura, partner and principal broker of Honolulu-based Commercial Asset Advisors, who represented the seller in this 988-unit portfolio, told PBN Friday that between 50 and 100 entities showed interest in the portfolio, although there were between five and 10 entities that showed serious interest in the properties.

“Multifamily apartment properties of this magnitude do not come to market often in Hawaii, and we had strong interest in the portfolio from a variety of mainland-based institutional investors, as well as a few local groups,” he said. “I believe the timing of these acquisitions will prove to be excellent for both buyers in the coming years. Kalaeloa should benefit from its proximity to Debartolo’s Ka Makana Alii regional mall project, as well as the numerous other commercial projects currently in development that will drive job growth in the Kapolei area. Similarly, Waena should enjoy an uplift from new projects in its surrounding area such as American Savings Bank’s new corporate campus, which will be just down the street, and Hunt Companies’ redevelopment of the Mayor Wright Homes site, which is just across the street.”

In 2012, the San Francisco-based private real estate investment firm specializing in multifamily transactions, purchased The Waterfront at Puuloa oceanfront rental community in Ewa Beach in West Oahu, now known as Kapilina Beach Homes, for $311 million from Hunt Cos., which was one of the biggest multifamily property transactions in the United States that year.

Beda said that the company is open to acquiring all types of apartment projects with at least 100 units on Oahu.

Carmel Partners has looked at some projects on Maui but most of its business will be done on Oahu, Beda said.

Rockpoint Group, which is familiar with the Hawaii market, with transactions involving the Four Seasons Hualalai Resort on the Big Island and the Courtyard by Marriott Waikiki Beach Hotel, couldn’t be reached for comment.

DiNapoli Capital Partners, which also is familiar with Hawaii, with such transactions involving the Aloha Beach Hotel on Kauai, declined comment.

Douglas Emmett did not respond to a message left by PBN on Friday.