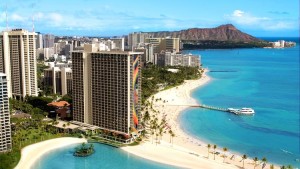 Honolulu was named the ninth top leisure destination based on bookings and social media mentions, according to a new study by Adobe.

Adobe (Nasdaq:ADBE) recently published its 2015 Adobe Digital Index Summer Travel Report based on aggregated and anonymous data from Adobe Marketing Cloud. It found that January was the best month to fly to to Honolulu and while hotel room rates were cheapest in September.

In a separate report based on the responses of 1,000 U.S. consumer who have travel plans this summer, it found 7 percent year-over-year growth in online travel bookings, with overall spending for summer topping $65 million. It said the average consumer will spend $2,788 on their summer travel with 57 percent of that being online.

It said this would be the first year that purchases on smartphones will surpass purchases on tablets, and says $1 our of every $5 spent on summer travel will come from mobile devices.

Oahu ranked No. 1 among the world’s island and sun destinations last year for hotel occupancy, while Maui came in third, and Kauai and the Big Island of Hawaii each made the top 10, according to a report by Hospitality Advisors LLC and Smith Travel Research.

Hotels on Oahu had the highest occupancy rate among other global island destinations in 2012, according to a report by Hospitality Advisors LLC and Smith Travel Research.

Hawaii as a whole was ranked third, behind comparable international destinations Singapore and South Korea, for occupancy rates in 2012, and second after Singapore in average daily room rate and revenue per available room, according to the report.

Among other island destinations, Oahu, Maui, Kauai and the Big Island ranked in the top 10 for all three categories in 2012 and appear to be headed for another strong year, said Joe Toy, president and CEO of Hospitality Advisors LLC.

“Hawaii is having an exceptionally strong winter season thus far,” Toy said in a statement. Although concerns over the economy are starting to be heard, advanced hotel bookings continue to point to a very busy summer.”

Maui’s occupancy rate for 2012 was 72.6 percent, ranking the island third, while Kauai was ranked No. 6 with a rate of 68.8 percent and the Big Island was 10th with a 62 percent occupancy rate. Other island destinations on the list were Phuket, Thailand; Bali, Indonesia; Aruba; the Maldives; and the Bahamas.

Maui also had the strongest RevPAR among Hawaii’s islands, and was ranked third among its global competitors with RevPAR of $182.27, an 8 percent increase from 2011.