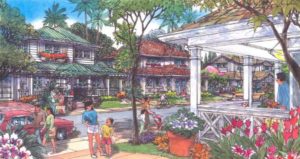 This rendering shows a view of the village at Castle &amp; Cooke’s Koa Ridge project

Castle & Cooke Hawaii’s long-delayed 3,500-home Koa Ridge master-planned community in Central Oahu will move ahead after the Hawaii State Supreme Court ruled in favor of the developer on Wednesday, saying the Hawaii Land Use Commission properly reclassified the 768 acres of land from agricultural to urban for the project.

The dismissal of an administrative appeal by the Sierra Club, Hawaii Chapter, and former state Sen. Clayton Hee was the last major hurdle faced by Castle & Cooke, which first proposed the project for the land between Mililani and Waipio more than a decade ago.

“Castle & Cooke is committed to striking a balance between supporting agriculture in Hawaii and providing much needed homes and jobs for our island residents,” Harry Saunders, president of Castle & Cooke Hawaii, said in a statement. “The company was founded in agriculture in the 1800s, and we continue to support agriculture for Hawaii today.”

Honolulu attorney Eric Seitz, who represented both Hee and the Sierra Club in their appeal, said he’s disappointed with the Supreme Court’s ruling.

“If [we] keep paving over agricultural lands because developers want to make a quick buck, that will be a terrible disaster for the people of Hawaii,” he told PBN. “We have historically been shortsighted with these types of decisions.’

Wednesday’s ruling affirms the approval Castle & Cooke received from the LUC in 2012, giving Koa Ridge all the land use approvals the project needs to move ahead.

Koa Ridge’s single-family homes were priced at about $300,000 back then, but more than a decade later, the rise in construction costs today has pushed those average home prices to more than $700,000, Saunders previously told PBN. Sales are expected to start next year.

Construction on the project is scheduled to begin in 2017, with full build-out/completion taking about 10 to 12 years, according to Castle & Cooke.

Pre-sales for Koa Ridge will start about three to six months prior to the delivery of the first homes, which should be available in the fourth quarter of 2018.

It will include single- and multi-family homes, a mixed-use center, a medical center, a hotel, light industrial, parks, an elementary school, a recreation center, churches and open space.

Meanwhile, planning for the developer’s 1,500-home Waiawa project across the H-2 Freeway is expected to begin at a later date.

Click here to read the 23-page decision by the state Supreme Court on the Koa Ridge project.