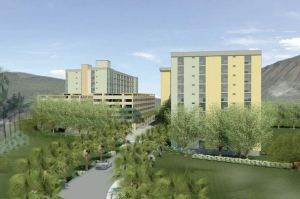 This rendering shows the plan for the 7000 Hawaii Kai residential rental project.

Hanwha Engineering Construction Corp. has secured $100.7 million in financing for its planned 7000 Hawaii Kai residential project in East Oahu, which is being developed by Honolulu-based Avalon Development Co. LLC, and includes 269 units at both market and affordable rents, the South Korea-based firm said Monday.

Hanwha Engineering Construction Corp. worked with HFF, a provider of commercial real estate and capital markets services in the United States, to structure the financing, which consists of a first lien loan in conjunction with a mezzanine investor.

HFF placed a $67.3 million first lien loan with Bank of the Ozarks and also got $33.4 million in mezzanine financing through iStar Financial Inc., which owns more than 200 residential condominiums at the Ilikai Hotel in Waikiki, to complete the multi-housing development.

The $165 million long-planned project, which was originally called the Hale Ka Lae condominium, and located at 7000 Hawaii Kai Drive, began construction in October and is slated to be completed in the second quarter of 2016.

The cost to develop the project is pegged at $108 million, but with the land cost penciled in, the total cost of it is $165 million, Christine Camp, president and CEO of Avalon, previously told PBN.

The firm was contracted in December 2013 by the landowner to develop, redesign and obtain financing for the project.