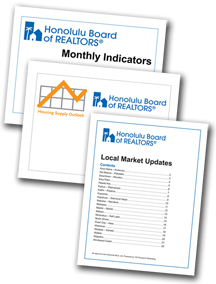 During February, sales of 217 single-family homes and 227 condominiums were reported through the Board’s MLS, an increase of 19.9 percent and a decrease of 23.1 percent, respectively, from February 2011.

The median price paid for island properties in February was $625,000 for single-family homes and $315,000 for condominiums, an increase of 9.6 percent and a decrease of 1.6 percent, respectively, compared to the same month last year. According to the Days on Market indicator, sales for singlefamily homes were accepted at a faster pace last month compared to a year ago with single-family properties listing for 34 days; condominiums were accepted in a longer amount of time, listing for 40 days, up from 36.

“February was an extremely strong month in the single-family housing market,” said Joe Paikai, president of the Honolulu Board of REALTORS®. “We saw significant increases in both the number of sales and the median sales prices compared to February of last year. It is also encouraging to see the median sales prices of both single-family homes and condos continue to rise.”