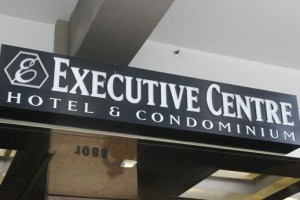 “Our owner would like to sell the units in bulk and in leasehold,” Okazaki said in an email to PBN. “It will be up to the buyer to purchase the fee from the AOAO.”

In 2013, the same owner put units on the market in a bulk sale, which was marketed by Colliers International Hawaii.

Okazaki said that this listing expired a while ago, and that this brand new listing with her firm is with the same owner.

“While these are most of the same units, they are not exactly the same individual units as some are being kept for his [the owner’s] personal use,” she said.

Kamehameha Schools sold its leased-fee interest in the building, which is located at 1088 Bishop St. and contains about 120 hotel units managed by Aston Hotels & Resorts, for about $75 million.

Michael Pang, president and principal broker of Honolulu-based Monarch Properties Inc., which represents the AOAO of Executive Centre, told PBN that the association bought the leased-fee interest because it had the opportunity to do so.

“The owners are in the process of putting in contracts to buy,” he said. “You’ll see more of that going on as the units have become more valuable.”