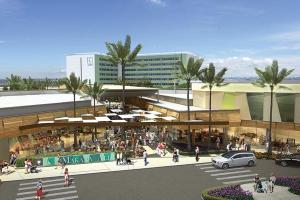 DeBartolo Development has formally started its 65-year lease with the Department of Hawaiian Home Lands of a 67-acre site in West Oahu for a long-planned 1.4-million-square-foot, $500 million shopping mall, with work beginning immediately to prepare the site for construction of the first phase of the mall, the Florida-based firm said Monday.

The long-term lease for the Ka Makana Alii mall is expected to generate more than $200 million in rent revenue that will support the construction of thousands of new homes for Hawaiian homesteaders, as well as programs benefiting Native Hawaiian interests across the state, the developer said.

The project is expected to create about 3,000 construction jobs and another 6,500 permanent full-time jobs upon completion.

The developer also plans to build a public community park in the Kanehili Homestead area as part of the community’s benefits package that it negotiated with the Department of Hawaiian Home Lands.

“We have worked closely together with DHHL to ensure this project delivers lasting value to not only the Native Hawaiian community, but also the residents of West Oahu,” Edward Kobel, president and COO of DeBartolo Development, said in a statement. “The long-term lease of the Ka Makana Alii site will create a dependable revenue stream for native Hawaiian beneficiaries for decades to come.”

Grading and grubbing activities are slated to begin this month, with a formal construction start date to be announced soon thereafter.

The first phase of the center, which includes more than 750,000-square-feet of retail, dining, entertainment and hotel space, is scheduled to open in 2016.