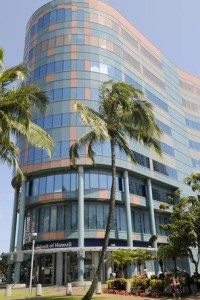 Japan’s Shoei USA Inc., a helmet manufacturer, paid $37.75 million in the leasehold purchase of the iconic Bank of Hawaii Waikiki Center, according to public records.

Up until now, the sales price of the 153,059-square-foot, nine-story building at 2155 Kalakaua Ave. — which includes a mix of office and retail tenants, including Bank of Hawaii, Starwood Hotels & Resorts, JTB Hawaii and 7-Eleven and soon-to-be Waikiki’s first Longs Drugs store — was unknown.

The previous owners, Honolulu-based Pacific Office Properties Trust Inc. (Other OTC: PCFO) and a group of Mainland investors, quietly put the center on the market for $38 million in 2012.

The land is still owned by the Lahaina, Maui-based company, Kapuahelani, which lists the Barbara McNamara Trust, Florence Thomas and Melissa Raymond as partners of the firm, according to public records.

Honolulu’s NAI ChaneyBrooks represented the buyer in the sale.

The property was built in 1980 as a retail center that was anchored by Japan’s Mitsukoshi Department Store. In 1989, it was acquired and redeveloped into a mixed-use office and retail center and was known as the ANA Building.

This rendering shows a view of the Waikiki Landing project from Ala Moana Boulevard heading toward Waikiki. The developer’s attorney told PBN that the $31 million project has received a funding commitment from a new investor

The long-planned $31 million Waikiki Landing project at Hawaii’s Ala Wai Small Boat Harbor, which lost its funding several months ago, has received a new funding commitment from another investor, the project developer’s attorney told PBN.

The project includes wedding chapels, restaurants, retail and office space and a boat-repair facility and fuel dock. The most recent estimate had construction starting in late September with a completion date of late November 2015. No new timeline for construction has been set yet.

Keith Kiuchi, the attorney for developer Japan-based Honey Bee USA, confirmed to PBN that the developer has received a signed letter of intent from an investor, and that the letter has been presented to the Hawaii Department of Land and Natural Resources, the project’s landlord.

Kiuchi declined to say who the investor is, although DLNR will be holding a hearing on Nov. 14 to talk about the project’s new investor.

Kiuchi has said it received lease approval from the DLNR, which owns the land, on Dec. 6, 2013, and has received all of its necessary permits to start construction.

Some 700 people from Hawaii’s real estate industry turned out for a 2014 forecast that was mostly positive.

The 2014 Hawaii Real Estate Forecast on Wednesday at the Hawaii Convention Center saw the return of the “wizard,” some amazing photos of a Japan ski trip and mostly positive predictions for this year’s industry outlook.

Wendel Brooks III, who recently left CBRE Hawaii to head up rival Jones Lang LaSalle’s retail operation, kicked the event off with a retail forecast that looks mostly sunny with a possibility of rain in 2014.

“Plan on delays,” he said in his presentation. “Construction will cripple parts of Oahu [and] rents will continue a slow upward trend. We have seen the bottom.”

Additionally, he pointed out that Hawaii should expect the expansion of retailers and grocery stores such as Safeway, Target and T.J. Maxx.

Bishop Street Commercial’s Matt Bittick took to the podium next but not before taking a “selfie” with Hawaii News Now’s Howard Dicus, who also was the moderator for the event, attended by some 700 people.

Bittick predicted that by the end of this year, the office market vacancy rate in Honolulu will hover around 13 percent, which is slightly lower than what CBRE Hawaii reported in the fourth quarter of 2013.

Whatever the case, Bittick noted that office space in Honolulu is still cheaper when compared to other markets such as San Francisco.

For Mark Ambard of Ambard & Co. Commercial Real Estate, who made sure to show the audience some of his recent Japan ski trip photos during his presentation, the industrial market will require lots of patience.

“Space is available, but not abundant [and] business growth is still relatively slow [with] current spaces often not matching current users,” he said in his presentation. “Develop now if you can find land. Rents will go up [so] tenants should lock in now. Land is gold, get now, develop now.”

From one colorful presentation to the next, Mike Hamasu of Colliers International Hawaii didn’t forget to bring his popular wizard hat to the podium.

His investment report encompassed some positive numbers for 2013 with $3.9 billion in sales, a 78 percent jump from the $2.1 billion recorded in 2012.

Led by hotel and apartment sales, the investment market is as active as it has been since the Great Recession.

And Hamasu, who jokingly mentioned that he is accepting donations for a new wizard hat, said he projects to see more of the same in the investment market in 2014.