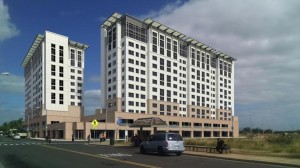 A rendering of the “Kapolei Mixed-Use Project” in West Oahu

The three-phased project, which is located in the downtown Kapolei area, includes affordable senior rentals and retail in its initial phase, a condominium and retail space in the second phase and more retail in the third phase.

All three phases of the “Kapolei Mixed-Use Development” are expected to start at the same time and be completed by Dec. 2017.

The developer said the project addresses the need for affordable senior housing, middle-market condos and retail within the City of Kapolei.

“Kapolei is in the midst of a rapid growth trajectory, implying that there is consistent demand for additional residential and commercial development,” the developer said in its final environmental assessment. “Due to the focus on single-family housing and townhouse development in the Kapolei area, [the project] addresses a specific market that is relatively underserved.”

The first phase will be made up of 154 affordable senior rental units with ground floor retail spaces in a 13-story tower.

The third phase will comprise an additional single-story retail building facing the remainder of the street frontage and filling out the balance of the site.

Located at 1020 Wakea St., the project is bordered by Haumea, Wakea, Alohikea and Ala Kahawai Streets on vacant, former agricultural land.

Polo Court Investors LLC, which is headed by Coastal Rim Properties and Agave Enterprises LLC, purchased the three-acre parcel from Goodwill Industries of Hawaii Inc. in June for $4.7 million, according to public records.