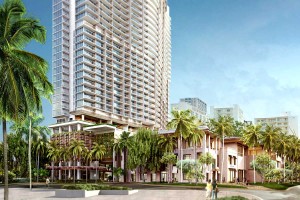 The 324-unit, 37-story first tower, known as the “West” tower, also is expected to have one of its restaurants open in April, with its second eatery — Hawaii’s first Dean & DeLuca — and its spa opening in July.

Douglas Chang, general manager of the Ritz-Carlton Residences, Waikiki Beach, told PBN on Friday that its 246-unit, 37-story second tower, or “East” tower, which began construction in February, is scheduled to be completed in the second quarter of 2018.

Both projects have created more than 600 construction jobs.

Located at 2121 Kuhio Ave., adjacent to the Luxury Row of retailers at 2100 Kalakaua that include Chanel and Gucci, the project will include Dean & DeLuca, Sushi Sho, BLT Market, BLT Bar & Grill and likely an ABC Stores Island Country Markets.

Lance Wilhelm, managing principal of Irongate’s Hawaii operation, previously told PBN that he is looking forward to finding more redevelopment projects not only in Waikiki but elsewhere in Hawaii.