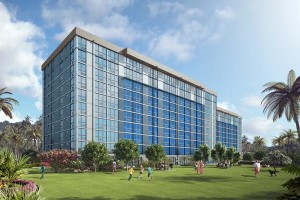 A rendering of the 7000 Hawaii Kai rental project, which began pre-leasing this week

The $165 million long-planned project, originally called the Hale Ka Lae condominium, began construction in October and is slated to be completed by the summer of 2016, Christine Camp, president of Avalon Development told PBN.

It will include two, three- and four-bedroom units, with 54 out of the 269 units in the affordable range.

The cost to develop the project is pegged at $108 million, but with the land cost penciled in, the total cost of it is $165 million, Camp previously told PBN.

Avalon was contracted in December 2013 by the landowner to develop, redesign and obtain financing for the project.

Honolulu-based firms Design Partners Inc. and Hawaiian Dredging Construction Co. were chosen to be design and build the project, respectively.