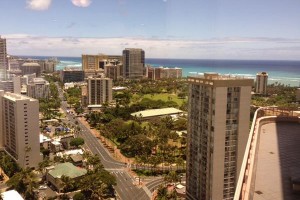 A new hotel project in Waikiki is being planned by a Hawaii developer with ties to a partner on the Mainland, an executive with the Honolulu architecture firm that’s part of the project confirmed to PBN.

The new tower, which is in the very early stages of the development process, would be built from the ground up — not a renovation or expansion of an existing property, Craig Takahata, vice president and managing director of WATG, told PBN.

Initial studies are being done on the property, which involves WATG’s high-rise expertise in order to maximize investment and work with development allowances, he said.

Takahata declined to identify the developer, or the exact location of the project.

New hotels built from the ground up are a rarity in the state’s tourism mecca.

There’s California developer Irongate’s Ritz-Carlton, Waikiki Residences two tower project on Kuhio Avenue, which are currently both under construction. Although this project will have a hotel component, it will include also consist of condominium for-sale units.

Plans have also been announced for redevelopments of certain existing properties, such as the King’s Village shopping center by the development team of The MacNaughton Group, Kobayashi Group and BlackSand Capital, which also is being turned into a condo-hotel, like the Ritz project.

There’s also the possible redevelopment of the Waikiki Trade Center into a hotel, according to California-based Coastwood Capital Group, the firm that owns the property.

Additionally, the 659-room Ohana Waikiki West hotel is expected to close down on March 27 for a redevelopment by the new owner — partnership that includes Honolulu’s BlackSand Capital — and reopen next year as the Hilton Garden Inn Waikiki Beach.

The development action in Waikiki comes as no big surprise, as the area continues to enjoy higher revenue per available room and average daily rates as well as occupancy rates.