Howard Hughes Corp. has already spent $3.5 million renovating Ward Centre, the shopping center where a Bed Bath & Beyond store will open this fall in the space formerly occupied by Borders bookstore.
HHC’s plans include a mixture of retail, residential and commercial construction projects over the next 12 years. More specifics should come in December, when the company says it hopes to announce “refinements” to the master plan created by General Growth Properties, former owners of Ward Centers. Almost daily, Striph says, he is in contact with KS, OHA, HCDA and other major players to coordinate efforts and “take a holistic view” of Kakaako.

“We’re trying to look at this as one whole area,” Striph says. “We want to make it the hottest, most vibrant residential community on Oahu. That’s our goal. We want to be really thoughtful and respectful of the community. We’re taking our time and want to do it right, reflecting the area’s history.” KS’s master plan, completed in 2009, calls for seven residential towers, up to 400 feet high, with low-rise “podium” units surrounding them. The build-out spans 15 years but has begun with alacrity.

Contractors will build the market-price units in the residential towers, says Paul Quintiliani, KS commercial real estate director, while KS itself may build the rental units. “We need to hit multiple price points to create a mixed-income community.”

HCDA’s latest Kakaako master plan, just a year old, calls for mixed-density using both high-rise and low-rise residential and commercial buildings, plus parks and civic parking. The homes will potentially provide low-, medium- and market-price condos and rentals close to a range of jobs, including high-tech jobs at the John A. Burns School of Medicine, the Cancer Center of Hawaii, now under construction, and private businesses in bioscience.

“In the early vision, it was the Blade Runner view,” says Anthony J.H. Ching, HCDA’s executive director. “We were going to be living in the stars and sky, with superblock condos connected by elevated walkways. The next permutation was mixed-use to accommodate small businesses, but still a high-rise community. But now, with (new urban-planning) rules emphasizing an active street scene, we’re back down to the street. We want people to be able to walk along, to look into the windows, to engage.

“It will be like the Whole Foods corner in Kailua – there’s a sidewalk, a living wall that softens the building, and you can walk out into the trellis area and just sit there though you’re not far away from a four-lane road. But it’s softened with a landscaped median and you feel comfortable enough to engage in a conversation. It’s casual. It encourages people to interact. Imagine if you have that kind of environment in Kakaako?”

This vision for the future includes a cultural overlay from projects envisioned by OHA on 30 acres of newly acquired state land makai of Ala Moana boulevard. The agreement, finalized July 1, transferring 10 parcels worth $200 million, largely settles the longstanding dispute between OHA and the state over shared
revenues for the use of Public Land Trust lands. It sets the stage for OHA to develop affordable rental housing, a cultural center to celebrate Native Hawaiian arts, an ocean-side promenade with a string of stores, and a high-rise up to 200 feet high at 919 Ala Moana to provide space for Native Hawaiian service organizations. Additionally OHA wants perpetual access to the ocean at Kewalo Basin.

A master plan will be developed for OHA’s 10 parcels, says OHA chairwoman Colette Machado, and it’s expected to be complete within two years.

OHA has asked HCDA to pull back on plans to develop two loading dock piers in front of Fisherman’s Wharf in order to keep that waterfront open. “We want that place free, to be able to house the Hokulea and other canoes,” Machado says. “… This is a no-brainer for Hawaiians. We want unimpeded access to the shoreline. That’s why Kakaako is so important to the trustees. It’s the last valuable shoreline in Honolulu.” 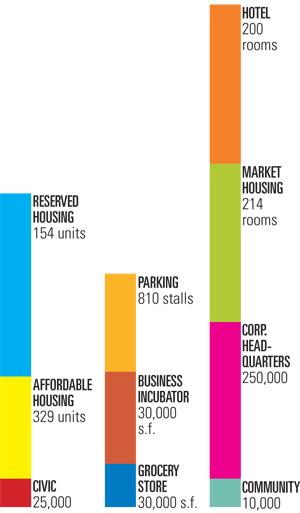 However, according to Stu Glauberman, compliance assurance and community outreach officer for HCDA, Kewalo Basin’s  harbor remains within the purview of HCDA. “Plans for harbor improvements have not changed nor been put on hold,” he says. Current plans call for KB Marine L.P., which has a 50-year lease, to build two wave-abatement fences and 100 mooring slips at a cost to KB of $20 million. Plans for the loading docks at Fisherman’s Wharf call for them to be built with harbor revenues and $3 million from the state revolving fund, but there’s no set timeline in place.

The final details of Kakaako’s transformation will change and be debated over the coming two decades, but the broad strokes seem guided by a vision that the major landowners share with the governor.

“What I want to see,” Abercrombie says, “is a contem-porary Hawaiian version of organic architecture in a context of urban growth, where high density in the core can be transposed into community life that reflects Hawaii and its basic values.

“If you go high, then you can disperse your density at street level, where people live, and prevent urban sprawl.
It will emphasize walking, open space, view-plane corridors. You’ll see it like a village.”