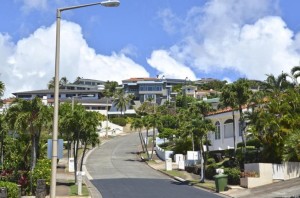 The homes in the gated community of Hawaii Loa Ridge.

The average monthly rent for a single-family home in Honolulu rose nearly 15 percent to $2,675 in the fourth quarter of 2015 — nearly doubled the national average — according to a new report.

The data used rents on three-bedroom single-family homes. Nationally, rents rose 3.1 percent to $1,353 per month from $1,312 per month when comparing year-over-year totals.

“Although there have been recent events that will have some impact on Hawaii’s overall rental market such as the decrease in the military’s housing allowance and the shut-down of HC&S on Maui, low unemployment, a limited housing supply, and an overall positive economic health forecast for the year will likely continue to push Honolulu rental prices upward,” said Kawika Burgess, president and CEO of Real Property Management Alliance, a Honolulu franchisee of the Real Property Management franchise system.

The vacancy rates for this market in Hawaii rose to 3.5 percent through the fourth quarter of 2015, an increase of 0.03 percent in the same quarter last year.

Nationally, this rate dipped to about 5 percent from about 5.6 percent when comparing the fourth quarters of 2015 and 2014.

The Real Property Management Alliance report also noted that, in Hawaii, about 34 percent of single-family homes are rented.