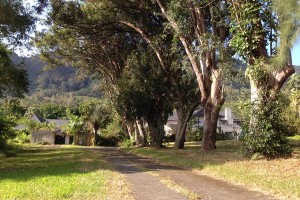 The historic Clarence H. Cooke Residence in Honolulu’s Nuuanu Valley, also known as the Marks Estate, is on the market for about $5.6 million, the broker marketing the sale told PBN Thursday.

JPMorgan Chase Bank took possession of the 4.7-acre, eight bedroom, eight bathroom mansion this past June for $6.5 million in foreclosure from the previous owner, Douglas Himmelfarb, who bought the property in 2006 for $4.4 million.

In May, Himmelfarb, a Hawaii art and furniture collector, auctioned off hundreds of items in the home, including furniture that once belonged to hair-care mogul Paul Mitchell and dishes once owned by movie producer Steven Spielberg.

Himmelfarb, who used to live at the estate, had collected most of the artwork and furniture pieces through inheritance, various estate auctions and antique shops across the United States.

His most interesting piece, which was not on the auction block, is a painting Himmelfarb claims was done by American painter Mark Rothko that could be worth up to $40 million, if it can be authenticated, which has been his quest for nearly three decades.

Built in 1932, the mansion, which is located at 3860 Old Pali Road, is known for its interesting architecture and connection to Cooke, a wealthy businessman, who was a former head of Bank of Hawaii and son of the heirs to the Castle & Cooke fortune.

The estate was also known as the Marks Estate after being purchased by Elizabeth and Lester Marks, and has been featured in movies and television shows. It includes maids’ quarters, pool house, carriage house, guest house and a caretaker house.

“[It’s for] someone who wants a trophy property,” David Buck, a Realtor with Hawaii Life Real Estate Brokers, who is marketing the property, told PBN. “It does need some work.”