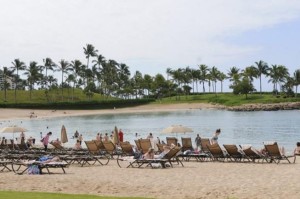 China Oceanwide Holdings Ltd. has purchased nearly 23 acres of land in Ko Olina in West Oahu to develop a luxury-branded hotel and a luxury-branded residential condominium for nearly $200 million, according to the sales deeds that were obtained by Pacific Business News and a company announcement.

The Resort Group, which is headed by Jeff Stone, the master developer of the 642-acre Ko Olina Resort, and a subsidiary of The Harry and Jeanette Weinberg Foundation, sold the nearly 1 million square feet of land to the Chinese company, which has investments in various sectors, such as real estate, finance, energy and media.

The total development will include a 150-unit condo and a 150-room hotel, with the condo having access to the hotel amenities.

There also will be commercial tenants as part of the project.

China Oceanwide Holdings did not specify the luxury brands that it would use for either tower.

In addition to its current real estate development projects in Los Angeles and New York, the company said it is looking for other potential projects in the U.S. market.

Oahu’s first Four Seasons Hotels & Resorts-branded property is scheduled to open at the Ko Olina Resort master-planned community in the spring of 2016. PBN first reported on the project, which involved the closure and rebranding of a JW Marriott hotel.

The Four Seasons’ commitment to bring its brand to Ko Olina Resort for its first property on Hawaii’s most populated island has drawn a lot of interest from other luxury hospitality brands, including Hong Kong’s Shangri-La Hotels and Resorts, as first reported by PBN.

That five-star luxury hotel brand currently has a presence in Asia-Pacific, North America, Middle East and Europe, but not Hawaii.

Aulani, a Disney Resort and Spa Hawaii in Ko Olina, ranked as the best hotel for families in the United States, according to the annual Travel + Leisure World’s Best list, released Wednesday morning.

The 19th annual World’s Best list is compiled based on a survey of T+L readers and includes every type of visitor experience, from hotels and spas to cruise lines and safaris.

Maui is the best Hawaiian island, according to poll participants, while Hawaii’s top hotel or resort is Four Seasons Resort Hualalai on Hawaii island, and Fairmont Kea Lani, Maui has the best hotel spa.

The magazine has posted its lengthy, multi-category list online. 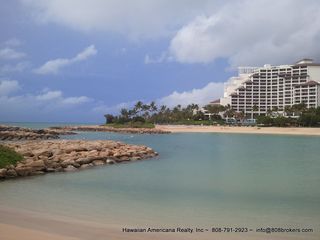 The Ko Olina Resort & Marina is a master-planned, active family resort community on 642 acres along the western shores of Oahu.

Ko Olina (Place of Joy) has sweeping ocean and mountain views as well as 1.5 miles of white sandy beaches.This resort includes a mix of single-family homes, townhouses & villas reflecting the architectural style of early Hawaiian living, secured within the gated grounds and skirted by waterfalls and ponds where black swans play.

Plans for the first mixed-use Disney Resort outside of its theme park developments broke ground in Fall 2008.

“Don’t forget about our special Buyer Rebate Program that we offer – which is 30% of our commission is paid back to you the Buyer, as a rebate – in other words if you purchase a property for $500,000 you would receive $4,500.00 back to use for your closing costs, new carpet or paint, furniture or anything you like even cash if your lender approves”