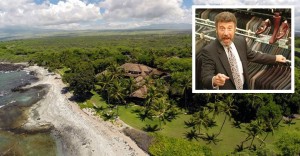 Michelle Huffman
December 9, 2015
You’re gonna like the way you look here. We guarantee it.

Who wouldn’t look good in a 10,000-square-foot mansion right on the Hawaiian coast?

Former Men’s Wearhouse CEO George Zimmer—popularly known for promising in TV spots “You’re gonna like the way you look; I guarantee it”—has listed the property at $35 million, the Los Angeles Times reports. The 7.5 acres comprise 10 parcels on the northwestern edge of the Big Island.

The men’s clothing magnate is downsizing as only the wealthy can: He’s moving to the 2-plus-acre, 3,000-square-foot home that Neil Young just sold him for $20 million. It’s just seven miles up the beach.

Zimmer’s property, which neighbors the Mauna Lani Resort, is one of the largest privately owned oceanfront properties on the Kohala Coast, according to the listing.

The mansion was built in 1995 by Hawaiian architect Lucky Bennett, who basically established the “Kona Coast” style: open rooms connected to extensive lanais (the Hawaiian word for porches), maximizing ocean views, plus native woods integrated throughout. It’s sort of midcentury modern with a tropical flair.

The house has seven bedrooms, nine bathrooms, a media room, and a billiard room with wet bar. Outside there’s a pool and spa, plus 1,000 feet of ocean frontage.

Zimmer has been through a rough patch the past couple of years. The Men’s Wearhouse board unceremoniously dumped him as executive chairman in 2013 amid complaints that he “wouldn’t accept anything other than full control” of the company he’d founded in 1973 but taken public in the 1990s.

The ouster of Zimmer, who has amassed quite the fan base over the decades because of his catchphrase, set off a firestorm on social media.

He hasn’t stayed down long, though. He has a new venture called zTailors, a website and app to connect the frumpy with the fixers-of-frump – tailors who make house calls.

And Zimmer’s new home ain’t too shabby, even if it is downsized. It has four bedrooms and six bathrooms, and it sits on a craggy beach with just a little less ocean frontage – about 800 feet.

Maybe that’s just as well. It’s not like salt water is great for suits. 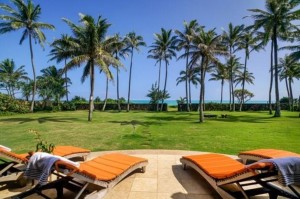 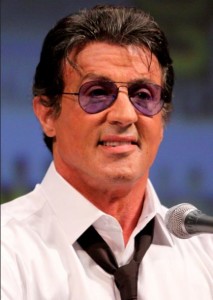 A Kahala Avenue estate that had some well-known owners throughout the years, including the co-founder of Zippy’s Inc. and Japanese businessman Genshiro Kawamoto, has been sold to an Arizona couple, according to public records.

The couple purchased the home from a subsidiary of Alexander & Baldwin Inc. (NYSE: ALEX) for about $3.1 million.

Located at 4398 Kahala Ave., the 3,144-square-foot five-bedroom, 4.5-bathroom estate was one of the homes purchased by A&B Properties Inc. in 2013 from Japanese businessman Genshiro Kawamoto.

Kawamoto, who bought the home in 2005 from Giorgio Caldarone, an executive with Kamehameha Schools, and Nella Caldarone, for about $2.9 million, became an unpopular neighbor in the posh Honolulu neighborhood after allowing some of his properties to deteriorate.

The home’s former owners include the late Francis Higa, co-founder of Zippy’s, who purchased the home in 1989 for $1.6 million.

Last month, A&B Properties told PBN that it is demolishing an existing home on another Kahala Avenue home that was formerly owned by Kawamoto. A&B said it is removing the existing structure for health and safety reasons, and that it has no plans for the parcel.

A&B Properties recently transferred the ownership of another one of its Kahala Avenue properties it purchased from Kawamoto.

The company said it is exploring potential residential construction on the little more than one-acre oceanfront vacant parcel at 4607 Kahala Ave.

Norris is the latest celebrity to acquire property on the Garden Isle. Others include Facebook founder Mark Zuckerberg and Oakley founder James Jannard.

The source told PBN that Norris, who has starred in several films and television shows, including “Walker, Texas Ranger,” is under contract to buy property at Paradise Island Ranch in Kilauea.

In 2012, Jannard’s Kauains LLC purchased a 23,162-square-foot parcel on Weke Road in Hanalei for $13.35 million from Jan Hailey Revocable Trust, near his current purchases. He sold it to Waioli Surf Shack Holdings LLC for $15 million a year later, according to public records.

Waioli Surf Shack Holdings has purchased five properties, a mix of vacant land and parcels with homes on them, for about $50 million.

Waioli Surf Shack Holdings’ C. Frederick Taylor is a partner in the hedge fund TGS Management, which has given almost $2 billion to charity, according to Bloomberg Businessweek.

The median price of homes on Kauai’s North Shore topped $1 million last month, according to data from Hawaii Information Service on behalf of the Kauai Board of Realtors.